#TurksandCaicos, August 5, 2022 – The Turks and Caicos Islands Regiment now has 18 more men as the second cohort of volunteers officially joined the ranks in July; a passing out ceremony was held on Saturday, July 23, 2022.

The regiment’s commander, Lt. Col. Ennis Grant, said he was confident the Marines were ready to take on the task of protecting the Turks and Caicos Islands and their people.

Existing marines have also been trained in humanitarian aid and now have a plethora of skills for hurricane season.

Major Thomas Ball, commander of the short-term training team which oversaw drills for new and existing recruits, was pleased with the trainees.

“Each individual has impressed the team with their dedication and determination to work hard and to undergo challenging training and improve. They have worked hard to ensure that their role within the regiment is the most useful as possible in dealing with the threats of the future,” he said.

The most physically fit recruit, the most improved and outstanding recruits all received awards at the ceremony.

Governor Nigel Dakin thanked the volunteers for their 24/7 contribution to the Turks and Caicos Islands.

“You do your best work at night when others are sleeping.”

He said: “Your cap badge – crossed tridents representing the power of the ocean and the Phoenix rising from the ashes of all future destruction tells the islands and the world what your contribution to these islands is. I hope you are now very proud to wear it.

Dakin also praised the incredible variety of professionals in the volunteer program who were willing to lend their military skills, as well as other civilian skills. He explained that the Regiment has a doctor; boat captains; divers; lifeguards; electrical engineers; mechanical engineers; carpenters; water and sewage treatment professionals; 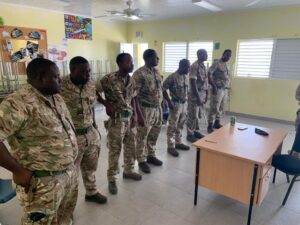 paramedics; firefighters; managers; security guards; a teacher and even a pilot.

He described the team as a regiment of all talents.

He reminded her of the heavy mandate they now carried – to go above and beyond in times of disaster, fear and adversity and to keep a cool head in times of anger.

“You offer something no one else can – you already know that the team is stronger than the individual not by words but by practice.”