The global medical tourism market could reach more than $180 billion over the next three years. A new study suggests that developing healthcare markets could benefit from the trend of recruiting lucrative patients from wealthy countries.

The term “medical tourism” has long been synonymous with reactionary myths about immigration. The theory was that swathes of internationals were flooding the healthcare systems of countries like the UK or the US in an effort to gain free access to healthcare unavailable in their home countries.

Claims that it was costing health systems arbitrary millions a year were largely unfounded. However, as the underfunded and neglected infrastructure of the US and UK healthcare systems continue to warp under the lingering pressures of the pandemic, many residents are turning, ironically enough, to health tourism.

With growing waiting lists preventing people from receiving important treatments, and private systems that have become unaffordable for many users, millions of U.S. residents alone participate in medical tourism each year – traveling most often in neighboring Mexico or Canada.

A new report from Glasgow Research & Consulting suggests that this growing demand could represent a huge opportunity for healthcare facilities and clinics around the world in the years to come. According to the strategic consultancy, the total value of the global medical tourism market could swell by 9.7% CAGR by 2025 – with some 44 million people crossing borders for healthcare each year. 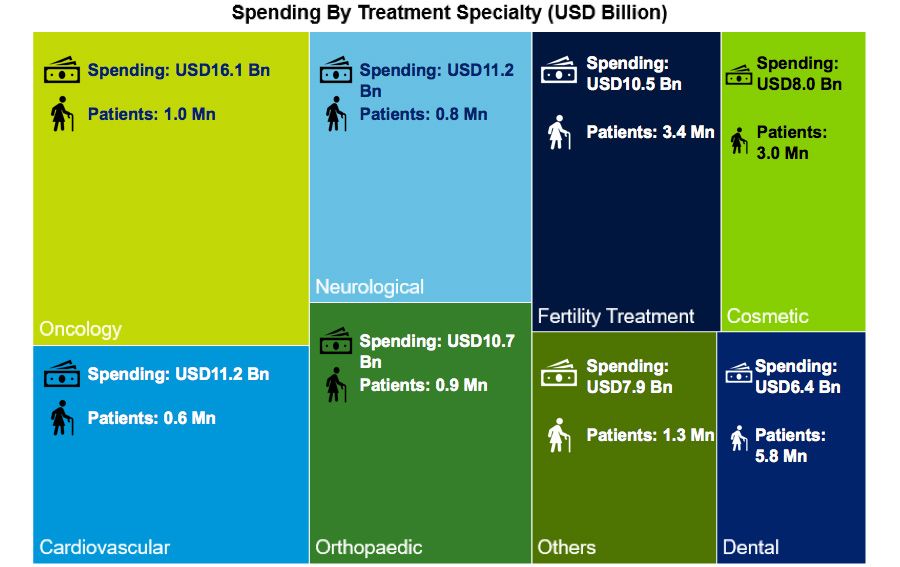 The medical tourism market was valued at $105 billion in 2019. This figure naturally fell in 2020, when international Covid-19 lockdowns reduced the number of trips possible throughout the year. But as restrictions eased and health systems in many countries struggled to recover, it became clear that there was a growing appetite to move.

Experts predict that by 2023, 27 million people will want to travel for treatment, bringing the market to around $120 billion. By 2025, this is expected to climb to $182 billion.

While health tourism is often talked about in the news as being dominated by elective treatments such as cosmetic surgery (hair plugs or turkey veneers, etc.), it increasingly includes intensive care treatments such as oncology patient desperation rising in a number of developed markets. 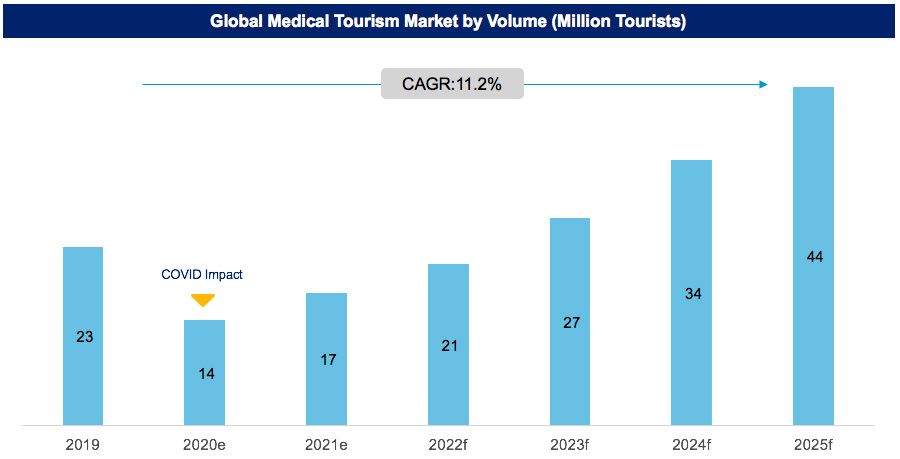 In 2021, oncology, cardiovascular and neurological treatments accounted for the majority of medical tourism spending in 2021. While the average number of patients is lower in these treatments, the higher cost of treatments in these specialties (the average cost per patient for oncology was $16,581, cardiovascular $17,597, neurology $13,559) shows that people’s desire for lifesaving treatments is teeming with opportunity.

The falling cost of air travel has contributed to the increase in medical travel, as patients are better able to manage both the price of long-distance travel and the overall cost of treatment abroad. For example, while the average cost of cardiovascular treatment seems high at $17,597, bypass surgery in the United States costs up to $123,000.

Even with a round-trip airfare, it’s probably a much cheaper treatment when taken in Asia. Thus, operators on the continent and in the Middle East could position themselves to take advantage of the situation more easily than ever.

However, medical tourism carries risks. Many healthcare destinations have hospitals that may be ill-equipped to handle complications from surgeries. There may also be an increased risk for the patient to come into contact with infectious diseases that are well controlled in their own healthcare system – such as hepatitis C or HIV – or antibiotic-resistant bacteria.

Additionally, tourist patients may also need continuity of care – which their tourist status will not make available to them for an extended period of time.